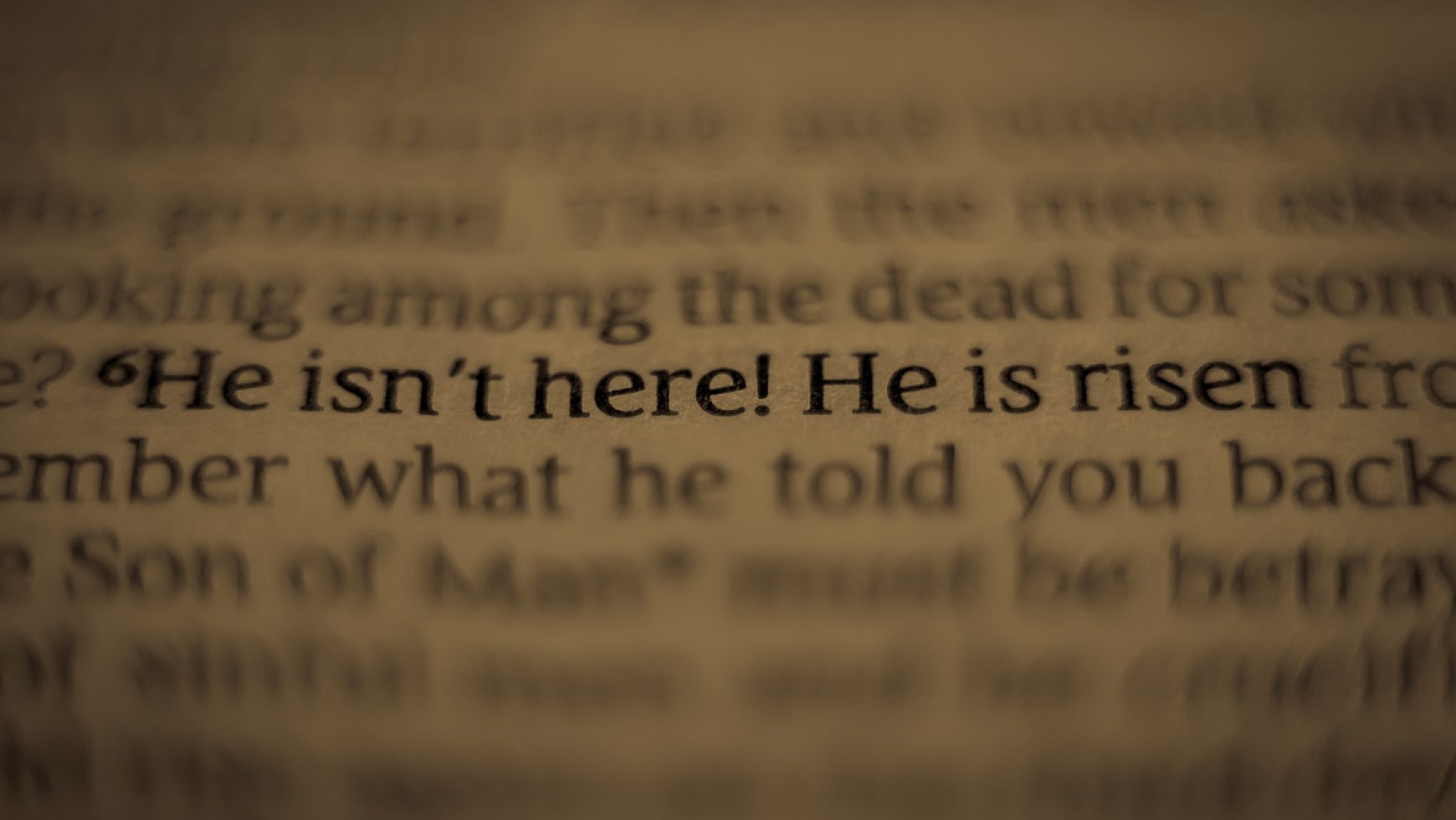 Cor. 15:3 For I delivered to you as of first importance what I also received:

Jesus Christ, our Savior, has conquered sin and death! He is no longer on the cross, and He certainly is not in the tomb! From the beginning of the church, the resurrection has been central to the Gospel message. The early church even greeted one another by saying, “He is risen!” while the expected response was, “He is risen indeed!” As we celebrate Resurrection Day, we rightly focus on Christ being raised from the dead. As we do so, we need to be reminded that the resurrection is the capstone of the Gospel.

In 1 Corinthians 15, Paul says that the Gospel is of first importance. It is our highest priority. To be saved, we must know and believe the same Gospel which Paul delivered to the Corinthians. Paul received this gospel from Christ Himself, and he preached it under the constant threat of persecution and death. We need to answer the questions, “What is the Gospel and why were Paul and others willing to die for it?”

According to Paul, there are four non-negotiables of the Gospel:

CHRIST DIED FOR OUR SINS ON THE CROSS

That Christ died for our sins according to the Scriptures (1 Corinthians 15:3b)

We preach Christ crucified, to Jews a stumbling block and to Gentiles foolishness, but to those who are the called, both Jews and Greeks, Christ the power of God and the wisdom of God (1 Cor 1:23–24).

As Christians, we preach a Messiah who died a gruesome death for our sins according to the Scriptures. Jesus endured great torture at the hands of evil men who were skilled at causing suffering and excruciating pain. The Romans had practiced crucifixion since the third century B.C. and had by Jesus’s time perfected its savagery.  Just consider these words written by the prophet Isaiah nearly 800 years before our Lord’s death:

Jesus suffered greatly at the hands of evil men, but the suffering He endured from the Father was much greater! Just let these next few words sink in:

But the LORD was pleased to crush Him, putting Him to grief; if He would render Himself as a guilt offering (Isaiah 53:10)

To defeat sin, Jesus had to take sin upon Himself and endure the wrath of the Father for the sins of the world. To defeat death, Jesus had to meet death head on! This brings us to the second non-negotiable of the Gospel:

CHRIST WAS BURIED IN THE TOMB

Jesus Christ died on the cross for our sins, and He was buried! Jesus’s death was no ruse! In other words, He truly died. The Apostle John records that on the cross Jesus said, “It is finished!” And He bowed His head and gave up His spirit  (John 19:30). John gave further proof of Jesus’s death saying that when the soldiers came, they saw that He was already dead, so they did not break His legs to suffocate Him, but one of the soldiers pierced His side with a spear, and immediately blood and water came out (John 19:34).

No one can endure the punishment Jesus took upon Himself much less sword plunged deep into His heart and lungs. John swore of His death saying, “And he who has seen has testified, and his testimony is true; and he knows that he is telling the truth, so that you also may believe” (John 19:35). According to John, after Jesus’s death, they took His body and prepared it for the grave. Moreover, they laid Him in a new tomb in the garden where no one had been laid, and they placed a large stone over the entry.

Powerfully, the eyewitnesses of the death and burial of our Lord never changed their story. In most cases, they suffered greatly for it, yet they never changed one aspect of it! This brings us to the third non-negotiable of the Gospel:

CHRIST WAS RAISED FROM THE DEAD!

That he was raised on the third day according to the Scriptures (1 Corinthians 15:4b)

This is the crux of the Gospel! If the resurrection did not occur, then the Gospel is not true. If Jesus Christ was not resurrected, then we will not be resurrected to reign with Him. Listen to the words of Adrian Rogers:

“The resurrection is not merely important to the historic Christian faith; without it, there would be no Christianity. It is the singular doctrine that elevates Christianity above all other world religions.”

Worship of a resurrected Savior differentiates Christianity from other religions! In other words, there is no good news if the Messiah has not conquered the grave!

It is essential to understand that in 1 Corinthians 15, Paul was not arguing for the resurrection of Christ which was a known fact in his time! There were too many witnesses running around to deny that Jesus had died and was raised. In fact, Paul argued that Christians could have confidence in their own resurrection because Christ had been raised from the dead! In other words, the resurrection is what makes the gospel, good news. Later in chapter 15, Paul argues:

For if the dead are not raised, not even Christ has been raised; and if Christ has not been raised, your faith is worthless; you are still in your sins. Then those also who have fallen asleep in Christ have perished. If we have hoped in Christ in this life only, we are of all men most to be pitied (1 Corinthians 15:16–19)

As H.A. Ironside aptly puts it,

“The Gospel is the Gospel of the Risen Christ. There would be no Gospel for sinners if Christ had not been raised.”

“The Gospel is the Gospel of the Risen Christ. There would be no Gospel for sinners if Christ had not been raised.”

Beloved, we have no hope outside of the resurrection! However, the most glorious words of the Bible come in Paul’s next words in chapter 15! But now Christ has been raised from the dead (1 Corinthians 15:20). This brings us to the fourth non-negotiable of the Gospel:

THE RESURRECTION IS A PROVEN FACT!

Doubters continually attack the resurrection of Jesus. Listen to the words of the famous newscaster, Peter Jennings:

“I was raised with the notion that it was okay to ask questions, and it was okay to say, I’m not sure. I believe, but I’m not quite so certain about the resurrection.”

I am not sure how he can believe the gospel if he questions the most important part and I am not sure why he does not believe in the resurrection considering the evidence. I am sure that Mr. Jennings would eagerly share any current event based on far fewer eyewitnesses! In these four verses, Paul gives more proof of the resurrection of Christ than we have of any other major historic event in the history of the world!

Not only did Christ appear to all the people that Paul describes, but most if not all of them suffered and even died because of their proclamation of the Gospel message including the resurrection! Verse eight is especially critical in this regard. We know that Christ appeared to Paul on the road to Damascus and he was miraculously saved.

We must note that by his own account Paul claims that if anyone could put confidence in the flesh, he could far more:

He was circumcised the eighth day, of the nation of Israel, of the tribe of Benjamin, a Hebrew of Hebrews; as to the Law, a Pharisee; as to zeal, a persecutor of the church; as to the righteousness which is in the Law, found blameless (Phil 3:5–6).

Now, I ask you who would be willing to give up everything in this life for a lie? Paul had it all, he was at the pinnacle of his culture. Why would he be willing to give all that up? The only answer is that Christ did conquer sin and death, he appeared to Paul on the road to Damascus, and now sits at the right hand of the Father just as Paul taught. In his defense before Festus, the governor exclaimed in a loud voice, “Paul, you are out of your mind! Your great learning is driving you mad.” But Paul said, “I am not out of my mind, most excellent Festus, but I utter words of sober truth (Acts 26:24–25).

With other religions, our destination is determined by our works here on earth, but it is not that way with Christianity. Jesus Christ has done all the work in conquering sin and the grave. All we must do is believe. Beloved, it is because Christ has conquered death that we will reign with Him forever in a new heaven and new earth where God dwells among men.